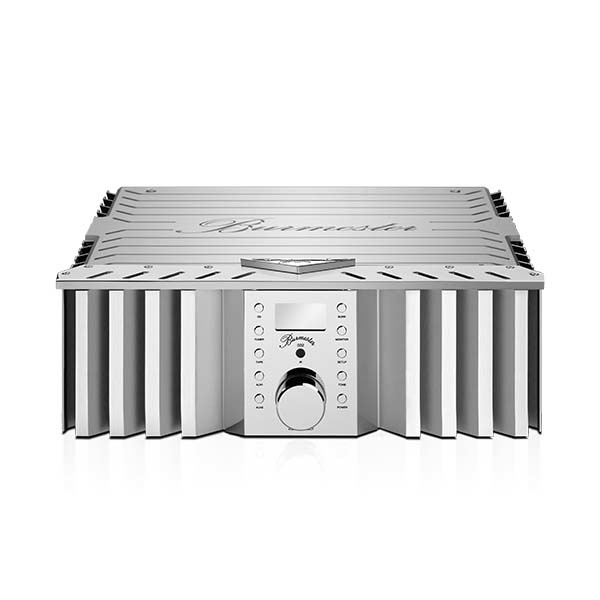 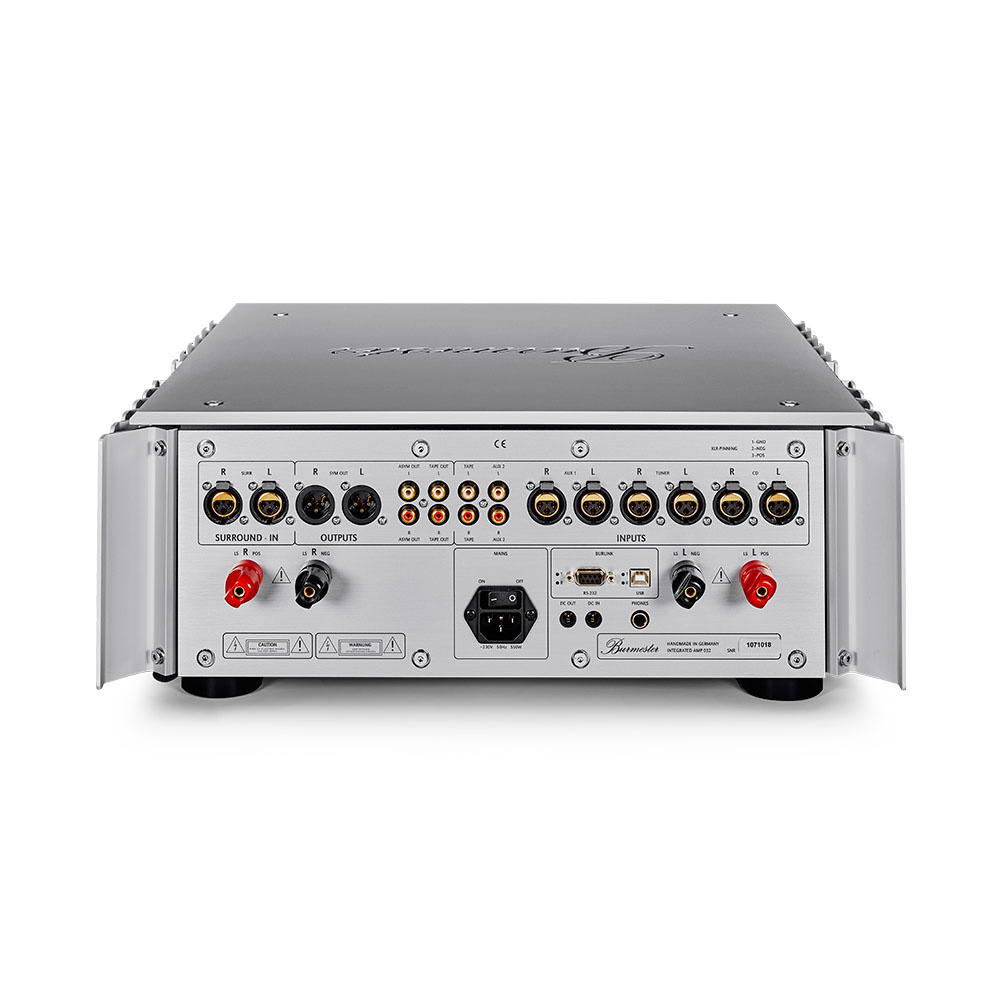 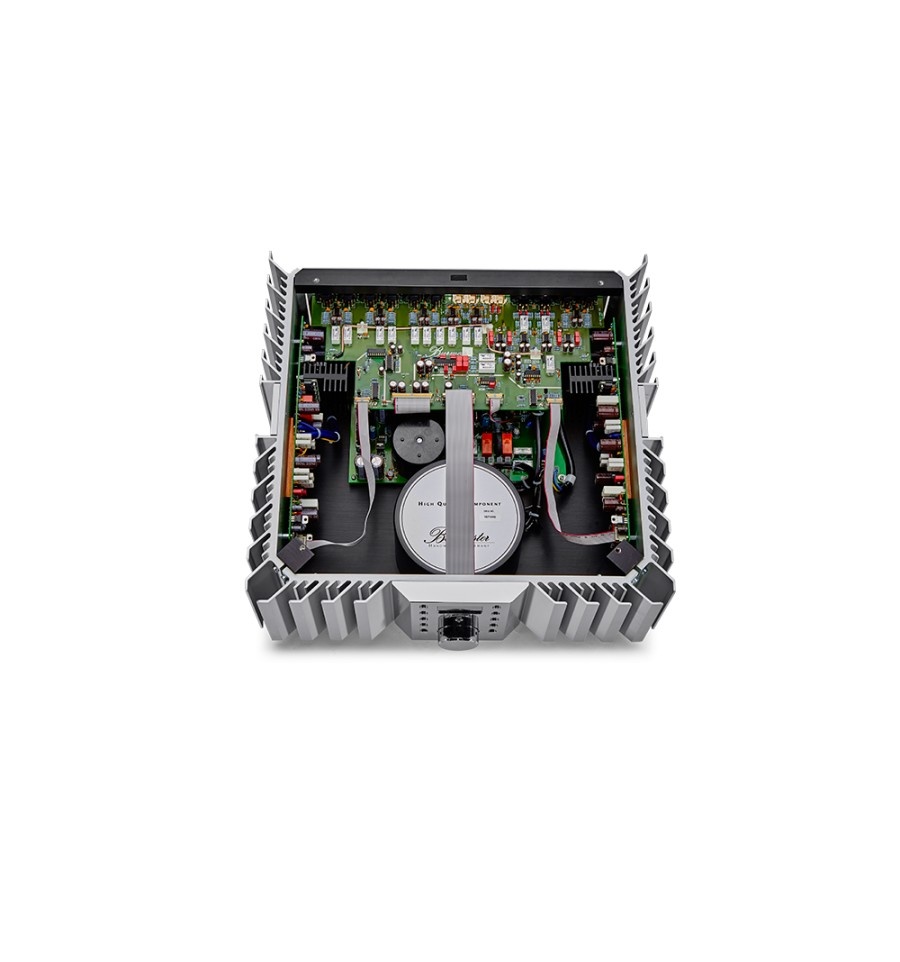 The 032 Integrated Amplifier offers a wide variety of connectivity that far exceeds the normal range of integrated amplifiers. Free shipping to the continental US only !

The integrated amplifier 032 comes from the same family of amplifiers as the 909, 911 and 956 MK2, which have won wide international acclaim. As a derivative from the power amp 956 MK2 and the pre-amplifier 935, the 032 closes a gap in our Basic model line. Like all amplifiers from the Burmester Company the 032 sports balanced design front to back and is completely DC coupled without distorting capacitors in the signal path. The external heat sinks of the 032 have the same unmistakable Burmester design pedigree found in all our other large amplifiers.

The chrome plate with the controls has been set into the front of the heat sinks. A solid middle plate has been machined from 25 mm thick brass. It surrounds the display and insulates it effectively from all external influence. It also prevents unwanted interferences from radiating to the signal-carrying parts of the amplifier. The big solid tuning knob raises and lowers the volume in both channels identically via an incremental control which is far superior to conventional potentiometers.

Like all Burmester amplifiers, the 032 has to pass a number of stringent tests. Even though we use only the very best component parts, we measure and select pairs of every part by computer. After they have been assembled into modules each module is checked in a reference setup.

After rough assembly each unit is subjected to a battery of app. 300 computer-aided tests to ensure its compliance with the reference prototype. After that the unit is burnt in at nominal load for a week, after which it is tested again. Only if the second set of measurements is identical to the first will the unit be released for final assembly. Only by this arduous process can we make sure that each 032 fulfills our promise of high reliability. The final check before packing and shipping is a thorough listening test.

The 032 Integrated Amplifier offers a wide variety of connectivity that far exceeds the normal range of integrated amplifiers. A PRE OUT output, for example, allows the connection of a separate power amplifier or the central volume control of different listening zones within a multi-room application. With its mighty 650 VA power supply the 032 Integrated Amplifier effortlessly delivers continuous high current in order to perfectly control even large speakers with low impedance and complex loads. Excellent special resolution and musicality are the hallmarks of the 032.

The 032 offers balanced circuit design and is completely DC coupled. There are no distorting coupling capacitors in the signal path. An intelligent protection circuit outside of the signal path monitors the working condition for overheating, DC offset and overloading.

A special feature of the 032 is its extremely high damping factor. This high damping factor in connection with the capability to quickly deliver very large currents ( rise time at 4Ω is only 1.5 μS ) give the amp a wide response and the ability to effortlessly control virtually any loudspeaker over its full frequency range. With its mighty 650 VA power supply the 032 is able to deliver continuous high currents and thus drive speakers with low impedance and complex loads. The large external heat sinks in typical Burmester design provide optimal cooling. The frequency response is practically load-independent. The sound of the 032 is character- ized by excellent spatial resolution, natural musical warmth and negligible distortion.

The transistors of the output stages are connected to the oversized heat sinks at the housing sides via a massive block of copper which guarantees the best heat abortion and dissipation. The driver stages, however, are located on a separate internal heat sink. This keeps wide temperature fluctuations of the power stage heat sinks from affecting the operating points of the driver stages.

Internal wiring for the power supply of the amplification stages and the signal transfer to the speaker terminals of the 032 consists of 10 mm2 high-purity copper wire. This makes sure that the high currents of the power amplifier reach the massive output binding posts without loss. For the signal-carrying conductors we consciously did not use copper rails, which have become all the rage recently, to avoid for example any unwanted micro phonic effects.

The sound of the 032 has been highly praised for its warm musicality yet detailed imaging. The 032 is second to none in its capability to draw minute musical details from the world’s best speakers even at very high volume levels.

The 032 is already prepped for future home theater applications. It offers a home theater through-put circuit which bypasses the preamp-section and routes signals directly to the power amp. In the future, this through- put can also be controlled by the new Burmester

The 032 offers a great variety of hook-ups. A PRE OUT terminal allows it to drive another power amp or connect to other audio setups to enable a central control of volume levels. Intelligent control circuits offer a plethora of programmable settings:

Impressions with attention to detail.

Recognizable as a typical Burmester even from the very first glance, the 032 integrated amplifier makes use of characteristic design elements of the Classic Line.

The heat sinks in typical Burmester design keep the 032 cool even under full power. The chromed control element is located on the front in between the attractive heat sinks the front. This mid-section milled from solid brass encompasses the display circuitry and protects it effectively against any unwanted spurious noise radiating on parts of the amplifier processing audio signals. The solid rotary knob switches both channels identically via an incremental encoder.

During assembly the transistors are carefully connected to the generously dimensioned heat sinks on both sides via a massive block of copper which takes care of optimal heat distribution and dissipation. The driver stages are installed on a separate internal heat sink. This prevents working point drift of the driver stages due to large thermal fluctuations in the heat sinks of the amplification stages. In the final assembly step the high-chrome control element is gently connected to the complex innards of the integrated amp. 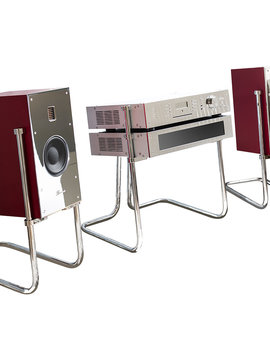 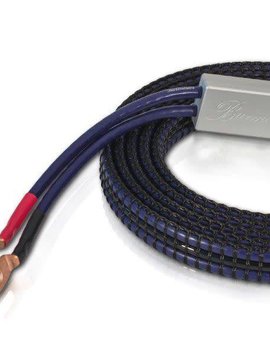 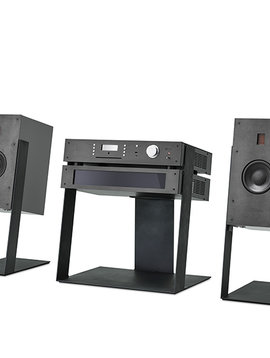