Taurus is something a little different for Constellation. In building our power amplifiers, we tend to focus purely on performance. But after our "dream team" of the world's top audio engineers created the relatively compact Inspiration Stereo 1.0, they realized they could use some of the same construction techniques to create an exceptionally powerful amplifier in a chassis considerably smaller than that of our Performance Series Centaur III amplifier. And now we have Taurus, an amplifier that stands only 8.5 inches high but delivers 500 watts per channel into 8 ohms, and comfortably doubles that number into 4 ohms.

The Heart of Taurus.

The heart of Taurus is a pair of high-output toroidal power transformers. By splitting the duties up among two transformers, our "dream team" was able to reduce Taurus's chassis size substantially, to the same height and width as the Inspiration Stereo 1.0. (Taurus's chassis is a few inches deeper, though.) We also added substantially more storage capacitance to support Taurus's higher power rating and to assure its dynamics are unrestrained even with demanding loads and high volumes.

Perfect Balance from Input to Output

Although Taurus has a more compact form factor than our larger amps, it relies on the same technologies developed for our first amplifier, the Reference Series Hercules.

The audio signal chain starts with our Line Stage Gain Module, a fully balanced input stage that employs the same topology used in all of our preamps. Separate circuits are used to amplify the positive and negative halves of the audio signal, and a servo circuit constantly monitors and maintains an essentially perfect balance between the two. This preserves even the subtlest details in audiophile recording, which can be concealed if the positive/negative balance is inaccurate. If a Constellation preamp is used, the Taurus's Direct input can be connected to form the Constellation Link, which achieves maximum possible fidelity by bypassing the amplifier's input stage.

The signal then travels to our Balanced Bridged amplification circuits, which use identical 125-watt, single-ended modules in combination. This unusual arrangement achieves two important goals. First, it gives Taurus the same delicate, musical sound of a small, single-ended amp, but of course with far superior power and dynamics. Second, because these single-ended modules use only NPN output transistors, the positive and negative halves of the signal are treated exactly the same. In a conventional amplifier, NPN transistors power the positive half of the signal while PNP transistors power the negative half. This difference can obscure the details that for many audiophiles are the most important part of a stereo presentation.

Taurus's dual toroidal power transformers and massive storage capacitor banks provide the necessary voltage and current to support its expanded power rating, and also to extend its dynamics. It can power even the largest, most demanding speakers to extremely loud levels while maintaining precise control of every note. Yet thanks to our Balanced Bridged design, Taurus always delivers the captivating musicality of a small, single-ended amplifier.

The output is rated at 500 watts into 8 ohms, increasing to 1000 watts into 4 ohms and 1600 watts into 2 ohms. Even when running at maximum output, Taurus remains completely stable because its modular design does not require a Zobel network at the output to filter out ultrasonic frequencies, a compromise many high-end amplifiers must employ to assure high-frequency stability.

To assure long service life for Taurus's internal components, we use the same thermal management system proven in years of use with the world's most demanding audiophiles. Heat from the output transistors passes into the amplifier's massive, deep-fin heat sinks, which are cooled by consistent airflow through hundreds of large ventilation holes in the sides of the chassis. Thus, when you demand the most from Taurus, it always responds with maximum performance and fidelity.

Large amplifiers have been a Constellation hallmark since our founding, and for good reason: The finest speakers demand instantaneous, unrestrained delivery of power to sound their best. Now Taurus achieves the same standard in a design that can fit in more listening rooms and equipment racks. Taurus is the ideal way to get Constellation performance and power into systems where, for whatever reason, a foot-high power amplifier won't quite fit.

*All Units Available in Black at an Additional Cost* 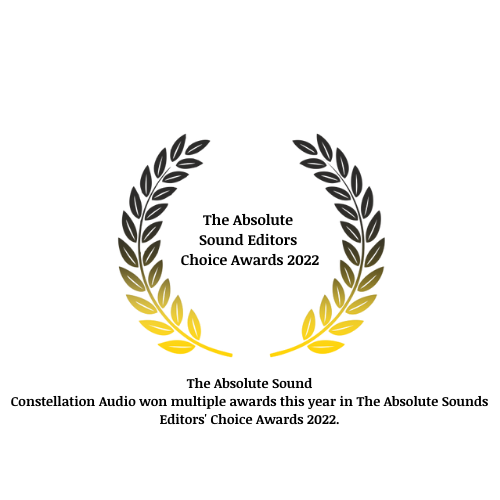 Contact us to inquire how you can finance your purchase through our partner,